Society and Water in Arborea – a Sardinian town with Venetian Origins 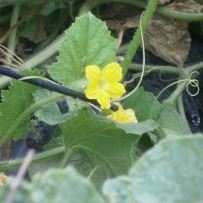 As part of CADWAGO, Olga Zuin did her Master thesis on the ethnography of risk perceptions in a Sardinian town with Venetian origins: “Ca’ Foscari University of Venice, Master Thesis in Anthropology, Ethnology and Ethnolinguistics, written by Olga Zuin, Supervisor: Gianluca Ligi”. This is an English summary of her work.

“Arborea is a little town located in the central-western part of Sardinia, Italy. It has a peculiar reality which the local inhabitants describe as an “island in the island”. There are three main reasons for this. 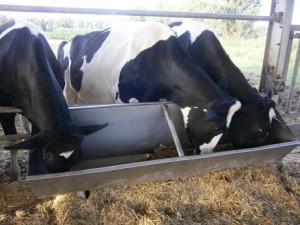 The town’s identity traits are key elements for investigating potentialities for change towards more resilient practices. One of these elements is water. Arborea’s landscape makes it clear that water plays an important role in local knowledge, revealing the variety of understandings, actions, priorities and stakes. The concept of water taskscape (Ingold, 2000) helps to understand the connections between a particular society and its environment, and the resulting meanings and practices enacted in a specific context and how these change over time. As an example, wetlands were in the past considered unhealthy environments and land recovery was considered a triumph of humans against nature; nowadays however wetlands are recognized as a heritage and have therefore become protected by the same humans who shaped that same landscape less than 80 years ago.

Climate plays an important role in Arborea’s water taskscape. Being able to predict rainfall to adjust irrigation practices is a fundamental skill for the agricultural entrepreneur. This skill is however being challenged by an increasingly unpredictable climate. Also during the occurrence of extreme events, such as flooding or drought, social institutions responsible to deal with risks, uncertainties and emergencies, need to take into account different perspectives and stakes, in order to apply the most effective solution.

How are risks related to climate change and water perceived in Arborea? 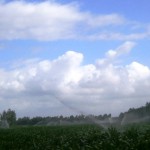 This research looked at how local actors in Arborea perceived risks related to climate change and water. Risks are never objective but rather always socially interpreted, and therefore discourses on risk are expressions of important dynamics occurring among different actors within society (Beck, 2000; Douglas, 1966, 1992: Douglas and Wildawsky, 1982; Luhmann, 1996; Lupton, 1999, 2003). When dealing with risks people express different rationalities, according to their position in society, their personal stake, and their interests and fears. At the same time each individual changes his/her stake according to the situation, the context, and the relations and dynamics he/she is involved in. The study highlights important issues around water governance in Arborea.

An interesting insight is the complex inter-relation between the risk of flood and the risk of drought. As Arborea’s community is dependent on cows and agriculture, the risk of drought is considered particularly dangerous, because it would affect crop production. During the late 1990s farmers experienced drought for several years in a row which meant they were only able to irrigate half of their fields and were forced to buy cow feed at the expense of their own economies. The last drought occurred more than ten years ago, a period of time in which a new dam built on the Tirso River collected a reservoir, considered sufficient for satisfying Arborea’s water needs. Flooding is perceived differently. In town it is not considered likely to happen because of its flat geography and because the water pumps, built in the 1930s, are considered to function well. Locally flood risk is perceived as more alarming as flooding episodes have recently affected several areas in Sardinia. In 2013 the town of Terralba, only 9 km from Arborea, was flooded. Arboreans stepped in to help their neighbours, compensating for what was perceived as an institutional lack of response.

What role do institutions play in risk management? 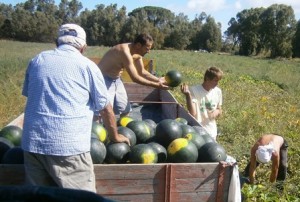 Certain social mechanisms are triggered when a risk is perceived, particularly the processes of blame and trust (Douglas, 1992). By investigating who (or what) is blamed and who is responsible for proposing solutions to a perceived crisis, it is possible to identify the institutions in place, their role, their power, their social legitimation, and consequently reflect on the most effective ways for stimulating change and promoting resilient practices.

In the context of Arborea, the cooperatives represent the most influential institution for local practices. They are in fact held responsible for promoting the interests of each member, while at the same time safeguarding the benefits for the whole community. Moreover, the cooperatives represent Arborea outside its “borders” and work as a mediator between internal and external dynamics. The University of Sassari, representing academic knowledge, has actively engaged in Arborea and developed a positive working relationship with the cooperatives. Due to this collaboration researchers have managed to involve a variety of local actors in their projects, who would otherwise probably not have joined the research process. The collaboration has also led to several co-developed projects, which brought together researchers, cooperatives, entrepreneurs and other stakeholders to share experiences and co-create new types of knowledges and practices. This has resulted in a shared feeling of inclusion and participation and co-designed solutions that are perceived to be more effective, ultimately leading to an increase in systemic resilience in Arborea.