Nitrate pollution as a biophysical and social issue 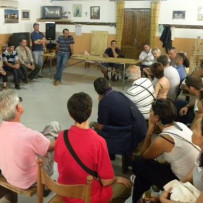 In this first post (of two) about the Italian case study in CADWAGO, Pier Paolo Roggero and his team at NRD explain how they engaged stakeholders in developing adaptive strategies around nitrate pollution and water management.

“One of the case studies in CADWAGO is located in the dairy district of Arborea (Province of Oristano, central Sardinia, Italy). The dominant activity is dairy farming, with some 150 dairy cattle farms (30,000 cattle) organized in a cooperative system on some 6000 ha of land. However, Arborea is a “complex district” characterized by multiple stakes in relation to many other activities that take place in the coastal area (tourism, agriculture, agro-food industry, fishing). The implementation of the EU “nitrate directive” and the related monitoring system prompted the nitrate pollution to the perception of the Arborea community. Farming was blamed by the authorities and the public to be the cause and in 2006 restrictions were applied, generating higher costs for farmers in the same years when feedstuff and mineral fertilizer costs suddenly increased.

Engaging with farmers in the dairy district of Arborea, Sardinia, Italy

In this context we started our research activity. The farmer’s cooperative prevailing attitude was defensive and after some four years of field co-researching in their farms they started recognizing their role in the nitrates pollution dynamics. Interactions were also designed with other stakeholders (other researchers, farmers, farmers unions, cooperatives, Pro Loco Arborea, representatives of local intermediate organizations, politicians, technical advisors, citizens etc.) to investigate their perspectives and identify the system’s boundary in relation to water governance and climate change adaptation. This interactive way to investigate stakeholders’ perspectives opened new learning spaces to de-construct and re-define the questioned issues towards concerted action emerging from hybrid scientific and local knowledge (Nguyen et al, 2013, Int J Agric Sust).

After five years, the farmers’ cooperative is pro-active in asking for partnership in expanding their agro-business outside the district of Arborea, to link with rainfed extensive beef cattle farming.  This is the first time since the land reclamation of Arborea some 85 years ago, that the farmers’ community of Arborea is willing to widen the boundaries of the “Arborea’s systems”, which has been quite closed to “outsiders”, by creating synergies with other districts. This could have relevant implications on the way nutrients and water are managed.”

The second post, that will be published next week, will discuss the development of future scenarios in which politicians and entrepreneurs as well as the other stakeholders are aware of their role in defining governance strategies.