Climate change, variability and extremes: in the context of water governance 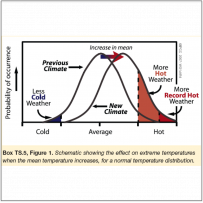 Anthropogenic climate change is clearly now one of the most significant and pervasive threats to the future health and wellbeing of our planet Earth and ecosystems. The biological Earth includes such things as microscopic organisms, plants, insects and animals (including humans) that are all dependent on water to sustain life. However, water availability and its security, are influenced by rainfall distributions in space and time associated with the background climate, the changes in weather and climate, and the governance/management of water as a critical resource.

While long term trends in global and regional temperature and precipitation have been observed, and are expected in the future, under climate change, the signature of climate variability is often much larger in magnitude than the trends. These signatures include the dominant global mode of year-to-year climate variability associated with El Niño – Southern Oscillation (ENSO) that profoundly affects changes in the distribution and intensity of Pacific region rainfall, but also influences precipitation changes around the world. It’s suffice here to point out that there are numerous other large-scale modes of climate variability that affect regional rainfall on year-to-year to multi-decadal time scales across the globe. Gaining deeper understanding of the mechanisms that underpin these climate modes and drivers can lead to improved seasonal climate forecasts – a factor that can be beneficial to short to mid-term planning and response strategies by management and governance structures. How these modes of climate variability will change in a warming world is unclear, and remains the subject of considerable ongoing research.

Events such as storms, tropical cyclones and other intense low-pressure systems (e.g., east coast lows, extra-tropical cyclones) can result in substantial rainfall in a short amount of time. These heavy rainfall events can be highly beneficial, in particular when they fill catchments and reservoirs (e.g., Sydney’s water supply benefits greatly when Warragamba Dam receives substantial downpours from east coast low rainfall events). On the other hand, extreme rainfall, which might be considered as the amount of rainfall received in <5% (or perhaps <1%) of these events, can also be detrimental – in particular when this rainfall leads to local-regional flooding, damage to infrastructure, and/or may pose a threat to life and property. Extremes are often described in terms of the tails in a probability distribution (or probability density function) (e.g., Box TS.5, Figure 1, Solomon et al 2007 shown in the thumbnail of this post). Under climate change, even if the shape of the probability distribution remains the same, a shift in the overall mean would be expected to lead to a substantial and significant change in the probability of extreme rainfall events. Furthermore, reductions in the recurrence intervals between rainfall events can exacerbate the risks of floods (e.g., the influx of storms hitting the southwest coast of the United Kingdom in 2013/2014; and the Queensland floods of 2010/11 which is one of the Cadwago cases), and/or droughts where the extreme is due to a persistent lack of rainfall.

Water governance planning has the potential to be most effective when it is well informed. With the added dimension of climate change, and based on my experiences in the marine space as leader of Australia’s Climate Change Adaptation Research Network for Marine Biodiversity and Resources (www.nccarf.edu.au/marine), I see flexibility and adaptability as key qualities for governance paradigms in a changing world.

I provide further discussion (including a podcast) on ENSO and extremes under climate change, including influences on rainfall and tropical cyclones across Australia, the marine environment, and what this means for stakeholders in industry, government and management, at: http://www.oceanclimatechange.org.au/content/index.php/2012/report_card_extended/category/el_nino-southern_oscillation

About the author: Neil Holbrook is Associate Professor of Climatology and Climate Change in the Institute for Marine and Antarctic Studies at the University of Tasmania. He is also an Associate Investigator in the ARC Centre of Excellence for Climate System Science. He is delighted to be able to contribute to the CADWAGO project.